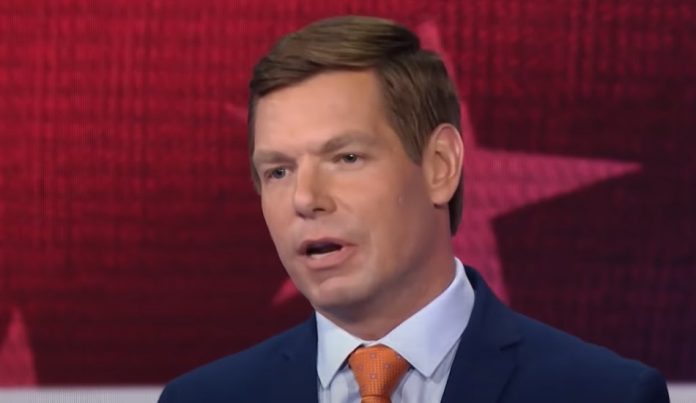 Representative Eric Swalwell, currently mired in a Chinese spy controversy, has alleged President Trump of masterminding the scandal. A report by Axios had revealed that Swalwell was in contact with a female Chinese spy named Fang Fang, aka Christine Fang, between 2011 and 2015.

Fang apparently played a part in Swalwell’s re-election campaign in 2014. She is not documented to have made any donations; foreigners are legally banned from making election contributions. U.S. intelligence agencies alerted Swalwell about Fang’s spy connection in 2015 and also gave him a “defensive briefing.” He is said to have cut all ties with Fang since then. Swalwell is one of the politicians who actively pushed the Trump-Russia collusion allegation. And now he believes that Trump is getting back at him.

“I’ve been a critic of the president. I’ve spoken out against him. I was on both committees that worked to impeach him… The timing feels like that should be looked at…it appears that this person [Fang] — as the story reports — was unsuccessful in whatever they were trying to do. But if intelligence officials are trying to weaponize someone’s cooperation, they are essentially seeking to do what this person was not able to do, which is to try and discredit someone,” he said in an interview with Politico.

Swalwell has refused to talk about his relationship with Fang, which according to the Axios report turned sexual. His office also avoided discussing the matter, citing concerns related to classified information. Axios reporter Jonathan Swan slammed Swalwell’s claim that President Trump leaked the story about his contact with the Chinese spy, calling it “completely absurd.” There have been calls to remove Swalwell from the House Intelligence Committee.

House Minority Leader Kevin McCarthy remarked that not only should Swalwell be removed from the committee, but he should be expelled from Congress as well. Senator Rick Scott asked for Swallwell’s removal from the committee, noting that his failure of judgment is astounding and that he should prioritize national security first and step down from his post immediately. Scott wants this incident to be an eye-opener for American citizens about the seriousness of the threat posed by Communist China. In the Politico interview, Swalwell states that he does not expect the controversy to cost him the seat at the House Intelligence Committee.

John Demers, the Assistant Attorney General for National Security, recently revealed that Chinese researchers with ties to the People’s Liberation Army (PLA) are running away en masse after the Trump administration took steps to restrict Chinese theft of American intellectual property (IP). He was speaking at the Aspen Cyber Summit.

“More than a thousand PLA affiliated Chinese researchers left the country… So, our prosecutions were just the beginning of that, but they allowed us to [send a] message to the Chinese government that, if you’re gonna send individuals here, you’ve got to do so honestly and you can’t do so hiding their affiliations with the PLA and Chinese military universities,” he said in the speech.

In addition to Demers, the event was also attended by William Evanina, head of the National Counterintelligence and Security Center. Evanina made it clear that Chinese officials are targeting Joe Biden’s potential administration and cabinet picks as well as people close to him. Director of National Intelligence, John Ratcliffe, recently revealed that he has shifted resources inside the annual intelligence budget to boost the focus on China since the Communist nation is the “greatest threat to America today.”

Medical professionals in the Chinese city of Wuhan, the epicenter of the novel coronavirus outbreak in the initial days of the pandemic, knew about...
Read more
U.S.

President Biden wants Congress to pass a $1.9 trillion pandemic aid bill that will include $1,400 in direct payments to every American citizen. White...
Read more

Furnishing a Campervan on a Tight Budget