For more than a decade now, 15 years to be precise, Time magazine has been regularly nominating influential people to its top 100 list of the most influential people in the world. This year, one of Hong Kong’s most prominent young politicians and activists, Edward Leung Tin-Kei, has made it onto the renowned Time list. The so-called 100 NEXT list has been divided into five categories — pioneers, artists, leaders, icons, and titans.

There is hardly an event that has been more breathtaking and attention calling than the recent and current uprising of democracy advocating citizens in Hong Kong. This may be one of the reasons, or at least an influencing factor, that may have led to the nomination of Hong Kong politician and activist Edward Leung Tin-Kai to the 100 NEXT list under the category leaders.

According to Time, although Leung is in prison for his involvement in the clash between Hong Kong police and civilians in Mong Kok in 2016, tens of thousands of demonstrators still chant the slogan “Liberate Hong Kong, revolution of our times,” which was coined by Leung himself and he is still the spiritual leader of the city’s months-long protests. Leung is also credited for bringing “localism” into the mainstream of Hong Kong and his award-winning documentary Lost in the Fumes has become a must-see for any serious Hong Kong protester.

The report also pointed out that although Leung is unable to join the mass protests, he has offered his support from prison and even wrote a poignant open letter to the protesters in July this year.

In his open letter to the Hong Kong protesters, Leung called on everyone not to be controlled by hatred and not to bet their precious lives against those in power. Citing a Biblical phrase, he further stated people should always remain vigilant and in a mindstate of peril while practicing perseverance. “All we need now is not to bet our valuable lives, but to practice perseverance and hope in suffering,” he wrote.

Edward Leung Tin-Kei, born June 2, 1991, was a former spokesman of the Hong Kong Indigenous, a Hong Kong localist group even though his birthplace was in Wuhan, Hubei Province. His father is a Hong Kong citizen and his mother was from Wuhan, the place where the couple got married, which is part of the Chinese mainland.

Leung’s maternal great-grandfather was once a big cotton and linen trader in Hankou. His maternal grandfather was a member of the Kuomintang, “one of eight registered minor political parties in the People’s Republic of China.” After 1949, the Communist Party confiscated the ancestral home of the Huang family, killing the family living there at the time.

Leung moved to Hong Kong with his mother at the age of one. He completed his secondary education at Shung Tak Catholic English College in Yuen Long District and studied at the University of Hong Kong. Leung majored in philosophy and graduated with a Bachelor of Arts in 2016.  Leung’s father was a middle school teacher in Chinese history, Chinese language, and Buddhism and often told him about Hong Kong’s history.

In January 2016, Leung represented the Hong Kong Indigenous group, which ran in the New Territories East, after being elected by the Legislative Council of Hong Kong. In February of the same year, just three weeks before the election, Leung was arrested by police in the clashes between police and civilians in Mong Kok. In December 2017, he resigned from his job as spokesperson of Hong Kong Indigenous. In the same year, the documentary Lost in the Fumes was released. In June 2018, he was convicted and sentenced to six years in jail by the High Court for assaulting a police officer during the Mong Kok unrest.

Leung is regarded by some as a “radical localist” who is loyal to Hong Kong. Others see in him a democratic thought-leader who is challenging Beijing’s totalitarian stronghold in Hong Kong. The slogan “Liberate Hong Kong, the revolution of our times!” was coined by him during his 2016 election campaign, which symbolizes the essence of what he stood up for and went to jail for.

In 2017, Leung decided to temporarily pause his participation in the movement for Hong Kong independence. Pro Chinese Communist Party (CCP) locals are often in a clinch with the pro-democratic residents of Hong Kong.

In 2018, he expressed his hope that the locals and pro-democrats could understand each other and unite to fight. That year, Leung explained in court that the brave force is brave and mighty.  Brave, as everyone understands, is also mighty. And as the saying goes, we can’t be arrogant, that is, in the face of injustice, we can’t give in, but have to fight.

Don’t be controlled by hatred

While many people in Hong Kong don’t want to be completely independent of mainland China, they still support the fight against Beijing. This is also the theme of Hong Kong’s movement against the extradition law since June this year.

It seems that those united in Hong Kong fight not against a country or a nation, but rather the injustice and unlawfulness that, if allowed to proceed unrestrained, could bring down Hong Kong’s democratic stance, its values, and freedoms, which are cherished by all residents in Hong Kong.

In 2019, Leung used his influence and leadership to support the Hong Kong anti-extradition protesters. In his letter, he urged the protesters not to give in to hatred and stay compassionate. As past events show, even peaceful protesters are meeting with more and more police violence, but this is especially true for those protesters who are misled by their anger and hatred to perform acts of violence that they themselves in a rational mind would not condone.

Experience has shown that Beijing capitalizes on any form of aggression coming from the protesters, using it to further strengthen its police and military presence under the banner of security. This may be why Leung called out to the protesters not to bet their precious lives against those in power and hoped that the protesters would not be controlled by hatred. 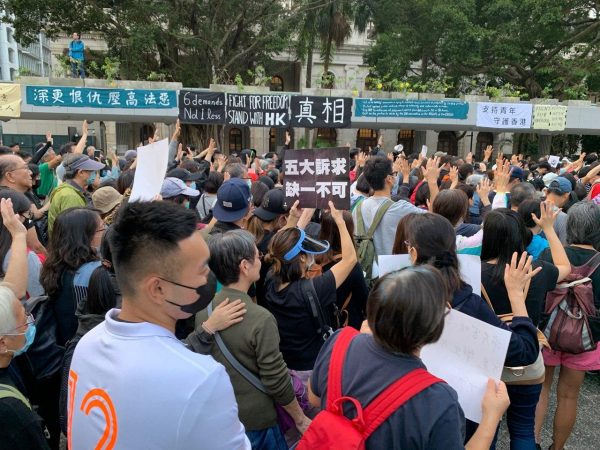 The rise of  police violence

Since Carrie Lam returned to Hong Kong from her trip to Beijing for China’s National Day in October, the police violence has been on the rise, with independent media reporting about ever more bloody tragedies.

Beijing’s motive is to instigate anger and create hatred, according to critics. Once people are driven by emotions and frustration, they tend to act violently, smashing police cars, ransacking and burning shops, and so on. Beijing has a tight grip on Hong Kong’s police system. At the end of the day, most policemen and policewomen are also Hong Kong residents torn apart and caught in the center of a tragic battle of value systems, fought out on the backs of Hong Kong residents.

If the masses could be brought to a pinnacle of frustration and extroverted anger, the Chinese Communist Party (CCP) could then possibly reach the goal of provoking the Hong Kong demonstrators to fight the masses. Finally, the Hong Kong government would announce the abolition of district elections, while arresting a large number of so-called rioters.

Wang Hua, a current affairs commentator, also said: “Don’t be controlled by hatred.” This is very important in the current situation. The CCP wants to let people lose their rational judgment and fall to hatred and anger, says Hua. At this time, a mindstate of reasoning and righteous thinking is the most important move for Hong Kong protesters.

Translated by Chua BC

Shanghai announces lockdown as it becomes the latest Chinese city to be afflicted by a new wave of CCP virus infections. Officials have claimed...
Read more
Wisdom

Compensation or Retribution for Good and Evil Deeds

More and more of the world’s people believe in atheism and evolution. They deny that “you reap what you sow,” and they deny that...
Read more
China

Some Mysterious Facts About Bees!