From Persecutor to Missionary: The Apostle Paul (Part 2)

The Italian painter Tintoretto painted 'The Conversion of Saint Paul,' in a collection of the national galleries in Washington, D.C. (Image: Public Domain)

Once Paul enlightened to who Jesus was, he lived the life of a hermit in the wilderness of Arabia, where he received a revelation from Heaven. When Paul returned to society, he had discarded his arrogance and selfishness and no longer acted as he pleased. He knew that all things occurred according to the arrangement of God and that man should live according to these arrangements. Paul’s words became more and more powerful as he worked to spread the message of Jesus. From his years of early study, Paul used his profound knowledge of the Old Testament to prove that Jesus was the Christ. Many people were convinced of these truths when they heard his sermons and converted to Christianity.

Paul’s successful preaching led to the wrath of the Jews. They arrested Paul and posted many guards to fortify the gate at the city of Damascus in order to prevent Paul’s escape. Despite the efforts of the Jews, one night, believers used a basket to lower Paul down the wall, helping him to escape.

In the decades that followed, Paul gave up his comfortable lifestyle to preach the message of Christianity. From Jerusalem to Rome, he traveled throughout the eastern coast of the Mediterranean and Asia Minor, through Greece to the Apennine Peninsula, south of Rome. Wherever he went, he built churches and converted a large number of people into believers. He was then imprisoned for two years, but once released, he continued preaching everywhere. The emerging faith of Christianity gradually spread westward, into the heart of Europe, due to Paul’s efforts.

Paul walked over 12,000 miles in the years of spreading his message, encountering many dangers and hardships along the way. Paul experienced tribulations that included being trapped in the wilderness, drifting at sea, being pursued and arrested, and being robbed. He was also imprisoned, whipped, clubbed, stoned, deprived of sleep and food, and had to endure the harsh, cold climate. Despite everything, he did not lose his faith and treated all hardships as tests and trials from God. Paul possessed the wisdom to view these difficulties as good things, with the understanding that they enabled him to improve his heart. Having undergone these trials, Paul believed in not relying on his talent and personal power, but rather in relying on divine power. As a result, he was not boastful and believed that the true meaning of love is helping others. 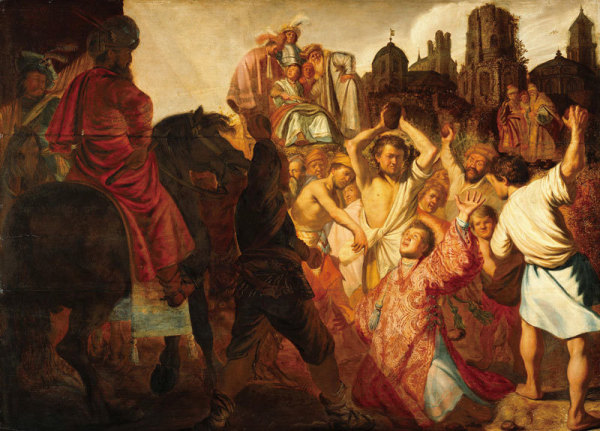 Paul’s influence on Christian theology was immeasurable. He transformed Christianity from a Jewish sect into a world-wide religion. The concept of civilization that he established has influenced the Western world, even to the present day. Nearly half of the New Testament was written by Paul, and his letters became an important source of Christian faith and doctrine.

In a human body, Paul lived in the image of God

After the Great Fire of Rome in A.D. 64, Nero falsely blamed the Christians for the arson. Many rumors circulated about the Christians in an effort to defame them. They were accused of sacrificing infants to God, eating meat and drinking blood, having incestuous relationships, and more. The Christians were blamed for any and all evil deeds.

Incited by these lies, all manner of cruel and bloody violence was perpetrated against the Christians in the name of justice. Tens of thousands of Roman Christians were driven into the Colosseum and torn to pieces by hungry beasts, while other Christians were tied to stakes and surrounded by bales of hay that were ignited and used as torches to provide light for Nero’s garden parties.

During this vicious massacre, Paul returned to Jerusalem in A.D. 67. He was then framed and Nero ordered his arrest. When Paul was imprisoned the first time, some royals and society’s elites converted to Christianity under Paul’s influence. So when Paul was imprisoned the second time, he was watched night and day and was not allowed to preach. Few people visited Paul out of fear for their own safety.

Even though Paul was nearly 60 years of age and no longer young, he remained confident and firm in his faith while in prison. He said: “Remember Jesus Christ, raised from the dead, descended from David, as proclaimed by my gospel, for which I suffer to the extent of being chained like a criminal. But the word of God cannot be chained.” Paul had reached the state of being able to give up his life and no longer feared death. 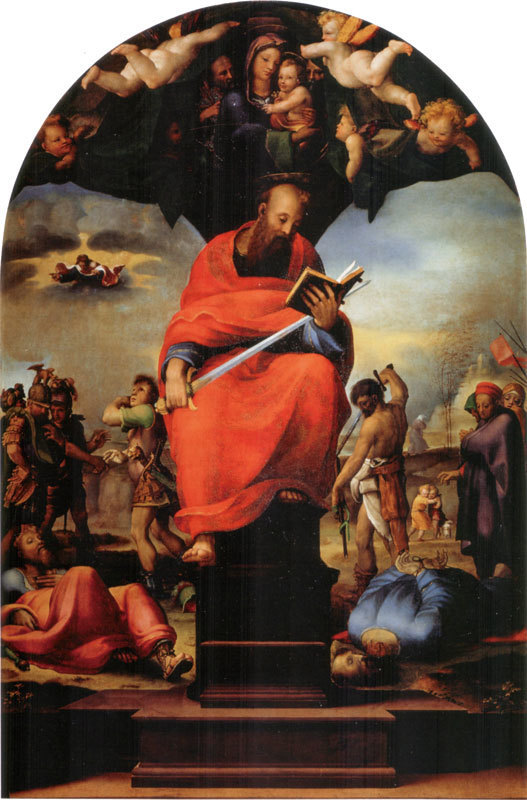 The Italian painter Domenico Beccafumi, ‘Saint Paul Enthroned,’ is housed in the Opera Museum of the Siena Cathedral. In the painting, Paul stayed in the Holy Sepulchre, holding a sword and a holy book. Paul’s beheading is shown in the foreground. (Image: Public Domain)

Paul was finally sentenced to death. Since he was a Roman citizen, he was spared the cruelty of being crucified. The executioner secretly brought him to the execution ground in the southern city of Jerusalem, where Paul calmly faced the guillotine and bravely died for his faith. Legend has it that when Paul’s head landed on the ground, it bounced three times, and the ground gushed out three clear springs.

Made of flesh and blood, Paul lived in the image of God. He endured many difficulties and tribulations for the sake of humanity so that others might also obtain the salvation found in Jesus Christ, leading to eternal glory. Paul’s words have touched the generations that have followed. He endured persecution and many dangers, demonstrating strength and wisdom imparted to him by God. His journey serves to encourage mankind

While the story of Paul took place 2,000 years ago, there are many people like Paul in Mainland China today. Many officials who used to participate in the persecution of Falun Gong have put down their power, status, and reputation and embarked on the path God has arranged. No matter what man does, God is watching with benevolence and compassion in an effort to save all people. Putting aside prejudice, ceasing bad thoughts and actions, and instead, treating others with kindness and compassion — these are things lead to redemption. Each of us is a participant in this unique historical period, and every day we make choices for our future. History’s many stories and lessons have been left to man as a guide. As today’s events continue to unfold, becoming ever-clearer, may we each choose for ourselves a path that leads to redemption and salvation, just as Paul did so long ago.

Translated by Chua BC and edited by Helen and T. Denning

Retribution for Killing and Breaking a Vow

Why Tradition Remains Essential in a Functioning Society

Whale Mythologies From Around the World

Sound Sculptures: Listening to the Singing Ringing Tree in England

Carbon-Rich Exoplanets May Be Made of Diamonds

Wolves Have Been Caring for the Pack for at Least 1.3 Million Years