A new study led by researchers at the University of Miami’s (UM) Rosenstiel School of Marine and Atmospheric Science found that smoke from fires in Africa may be the most important source of a key nutrient — phosphorus — that acts as a fertilizer in the Amazon rainforest, tropical Atlantic, and Southern oceans.

Nutrients found in atmospheric particles, called aerosols, are transported by winds and deposited to the ocean and on land where they stimulate the productivity of marine phytoplankton and terrestrial plants leading to the sequestration of atmospheric carbon dioxide. The study’s senior author, Cassandra Gaston, an assistant professor in the Department of Atmospheric Sciences at the UM Rosenstiel School, said:

“It had been assumed that Saharan dust was the main fertilizer to the Amazon Basin and Tropical Atlantic Ocean by supplying phosphorus to both of these ecosystems.

“Our findings reveal that biomass burning emissions transported from Africa are potentially a more important source of phosphorus to these ecosystems than dust.”

To conduct the study, the researchers analyzed aerosols collected on filters from a hilltop in French Guiana, at the northern edge of the Amazon Basin, for mass concentrations of windborne dust and their total and soluble phosphorus content.

They then tracked the smoke moving through the atmosphere using satellite remote sensing tools to understand the long-range transport of smoke from Africa during time periods when elevated levels of soluble phosphorus were detected. They were then able to estimate the amount of phosphorus deposited to the Amazon Basin and the global oceans from African biomass burning aerosols using a transport model. 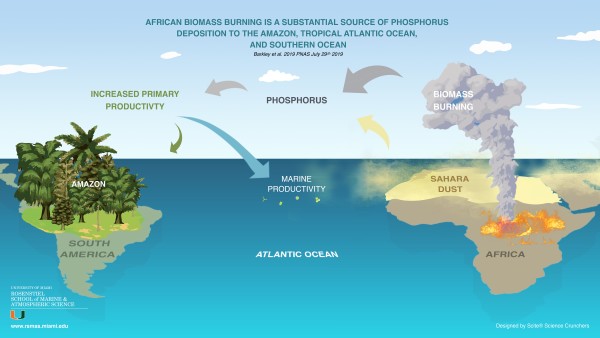 The analysis concluded that the smoke from widespread biomass burning in Africa, mostly the result of land clearing, brush fires, and industrial combustion emissions, is potentially a more important source of phosphorus to the Amazon rainforest and Tropic Atlantic and Southern oceans than dust from the Sahara Desert. UM Rosenstiel School graduate student Anne Barkley, lead author of the study said:

“To our surprise, we discovered that phosphorus associated with smoke from southern Africa can be blown all the way to the Amazon and, potentially, out over the Southern Ocean where it can impact primary productivity and the drawdown of carbon dioxide in both ecosystems.”

“Aerosols play a major role in Earth’s climate, however, there is a lot that we don’t understand regarding how they affect radiation, clouds, and biogeochemical cycles, which impedes our ability to accurately predict future increases in global temperature.

“These new findings have implications for how this process might look in the future as combustion and fire emissions in Africa and dust transport patterns and amounts change with a changing climate and an increasing human population.”

The study, titled “African biomass burning is a substantial source of phosphorus deposition to the Amazon, Tropical Atlantic Ocean, and Southern Ocean,” was published on July 29, 2019, in the Proceedings of the National Academy of Sciences.

Provided by: Diana Udel, University of Miami [Note: Materials may be edited for content and length.]

Previous articleWhy a Divine Horse Knelt in Front of a Merchant
Next articleThomas Dambo: The Artist Who Creates Giant Trolls Out of Trash

The Secret of Australia’s Volcanoes Revealed

Why have there been so many eruptions since the age of the dinosaurs? Geoscientists at the University of Sydney can now provide a clear...
Read more

Biden’s Pick for Secretary of State Agrees with Mike Pompeo: Repression of Uyghurs is Genocide

Returning to a Child-Like Heart