Bringing You Truth, Inspiration, Hope
Home Sports Martial Arts A Rare Interview With the Master of the Sword
SportsMartial Arts

A Rare Interview With the Master of the Sword

Zhang Sanfeng is known as the founder of Tai Chi, or Taijiquan, which is an internal Chinese martial art practiced for both its defense training and its health benefits. The term taiji refers to a philosophy of the forces of yin and yang, related to the set moves. It is said that many of the Zhang Sanfeng skills were imparted to him in his dreams, which have been carried forward into modern times. The following is another case of skills emerging in one’s dreams.

Master of the sword

Swords crafted by Chen Shicong, a famous swordsmith from Taiwan, cannot only cut rock, but also can immediately bounce back after being bent. The sword has been a Buddhist and Taoist instrument since ancient times. When Chen Shicong started his sword casting, China’s sword-making skills had been lost for more than 3,000 years. 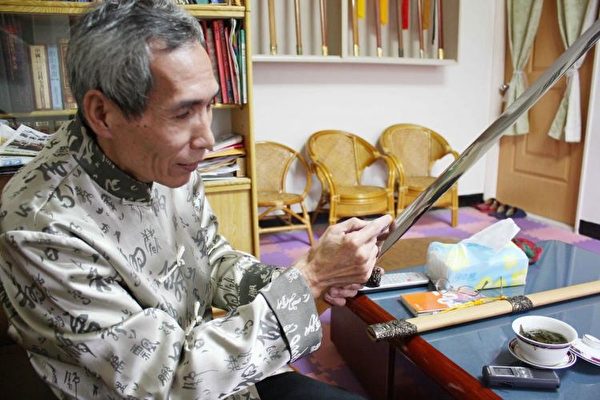 Chen Shicong explains the key points of one of his swords. (Image: Matthew Robertson / The Epoch Times)

Chen Shicong did extensive research before beginning his craft, but noted that some of the most difficult techniques were shown to him in his dreams. Sword-casting professionals, such as Chen Shicong, worship Ouyezi, the founder of the Chinese steel sword casting. In fact, as long as he maintained a sincere heart for the spiritual world, images in his dreams taught him long lost sword-casting techniques. The most important skills imparted to Chen Shicong in his dreams were the skill to forge the Sword King Seven-Star Sword, which had been lost for many years. It is said that it is an instrument of the four Great Divine Guardians.

Chen Shicong needs to meditate before casting his swords. He said: “There are two types of sword, one is alive and the other is dead. The live sword will absorb people‘s energy and the essence of the Sun and the Moon in the casting. The quality of the sword depends directly on the spiritual cultivation of its caster.”

When people think of martial arts, the first thing that probably pops up in their minds is the Kung Fu-style fights as seen in...
Read more
Martial Arts

The Connection Between Chinese Dance and Kung Fu

Isn’t it surprising that when observing Kung Fu fight scenes, the martial artists sometimes look as if they could be performing a type of dance?...
Read more

WHO Continues to Defer to Beijing in COVID-19 Origin Investigation

Close to a year after the COVID-19 outbreak in Wuhan, China, the World Health Organization has been unable, or unwilling, to either...
Read more

U.S. Democratic presidential contender Joe Biden has said that as president, he would forgive $10,000 in individuals’ student loans, including more relief...
Read more