The request follows an official statement the White House released on November 20. In the statement, President Trump refused to hold the crown prince accountable for Khashoggi’s death, despite an internal CIA report indicating the crown prince ordered his assassination, according to the Washington Post.

“Our intelligence agencies continue to assess all information, but it could very well be that the crown prince had knowledge of this tragic event — maybe he did and maybe he didn’t!” the president said, adding: “We may never know all of the facts surrounding the murder of Mr. Jamal Khashoggi,” and said: “In any case, our relationship is with the Kingdom of Saudi Arabia. They have been a great ally in our very important fight against Iran.”

Later in the day at a news conference, President Trump said he was “not going to destroy the economy of our country” over Jamal Khashoggi’s death by giving up arms deals to Saudi Arabia. He also thanked Saudi Arabia for the declining price of oil in a tweet: 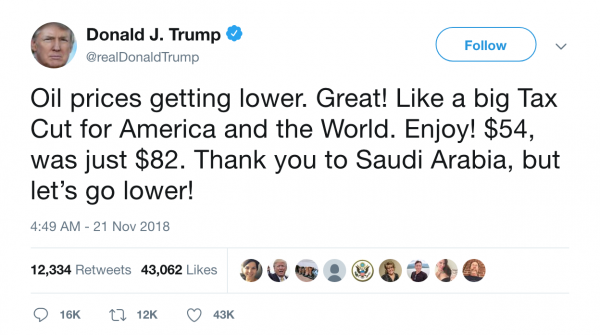 The Global Magnitsky Human Rights Accountability Act requires the President, upon receipt of a request from the Chairman and Ranking Member of the Senate Committee on Foreign Relations, to determine whether a foreign person is responsible for an extrajudicial killing, torture, or other gross violation of internationally recognized human rights against an individual exercising freedom of expression, and report to the Committee within 120 days with a determination and a decision on the imposition of sanctions on that foreign person or persons.

The recent disappearance of Saudi journalist and Washington Post columnist Jamal Khashoggi suggests that he could be a victim of a gross violation of internationally recognized human rights, which includes “torture or cruel, inhuman, or degrading treatment or punishment, prolonged detention without charges and trial, causing the disappearance of persons by the abduction and clandestine detention of those persons, and other flagrant denial of the right to life, liberty, or the security of person.”

Therefore, we request that you make a determination on the imposition of sanctions pursuant to the Global Magnitsky Human Rights Accountability Act with respect to any foreign person responsible for such a violation related to Mr. Khashoggi. Our expectation is that in making your determination you will consider any relevant information, including with respect to the highest ranking officials in the Government of Saudi Arabia.

The lawmakers previously invoked the act on October 10 to trigger an investigation into Khashoggi’s disappearance. In response to that request, the U.S. Treasury Department sanctioned 17 individuals it said were involved in Khashoggi’s death. The Trump administration has 120 days to respond to the latest request with a determination of Crown Prince Mohammed bin Salman’s culpability in Khashoggi’s killing.

The Global Magnitsky Human Rights Accountability Act authorizes the president to block or revoke the visas of certain “foreign persons” (both individuals and entities) or to impose property sanctions on them. People can be sanctioned (a) if they are responsible for or acted as an agent for someone responsible for “extrajudicial killings, torture, or other gross violations of internationally recognized human rights,” or (b) if they are government officials or senior associates of government officials complicit in “acts of significant corruption.”

The Magnitsky Act was signed by President Barack Obama in 2012. It was named after tax accountant Sergei Magnitsky, who died in a Moscow prison in 2009 after investigating a US$230 million fraud involving corrupt Russian tax officials. It was expanded into the Global Magnitsky Human Rights Accountability Act in 2016, which allows that perpetrators in any country can be punished.

The act promotes respect for human rights at all levels of government by enabling the U.S. executive branch to apply targeted sanctions on any individual involved in a human rights violation, from senior officials to low-level officers and even nongovernment associates. These sanctions can take the form of asset freezes for funds held in U.S. banks and bans on visas for coming to the U.S.

In July of last year, the Falun Dafa Info Center and the World Organization to Investigate the Persecution of Falun Gong (WOIPFG) jointly submitted a list of Chinese nationals who participated in persecuting Falun Gong practitioners. The list was submitted to both the U.S. Department of State and the U.S. Department of Treasury pursuant to the Global Magnitsky Human Rights Accountability Act.

David is an author and copyeditor with Vision Times. He has a diverse background with degrees in Forestry, Economics, History, and Geographic Information Systems (GIS). He helped establish and served as Chairman of the Winchester School of Chinese Culture where he implemented school-age educational programs in Chinese and English. David lives in Winchester, Massachusetts with his wife Beihua and their two children.

US Lawmakers Demand Answers From Disney Over Mulan Xinjiang Scandal