In recent years, any large-scale protest or welcome activity has been organised and facilitated by the CCPPNR. (Image: Hermann Rohr / Vision Times)

The China Council for the Promotion of Peaceful National Reunification (CCPPNR) is headquartered in Beijing, China. The council’s current chairman, Yu Zhengsheng, is a member of China’s Politburo Standing Committee, while the executive vice-chairperson, Sun Chunlan, is both a member of China’s Central Politburo, as well as the head of the United Front Work Department (UFWD). 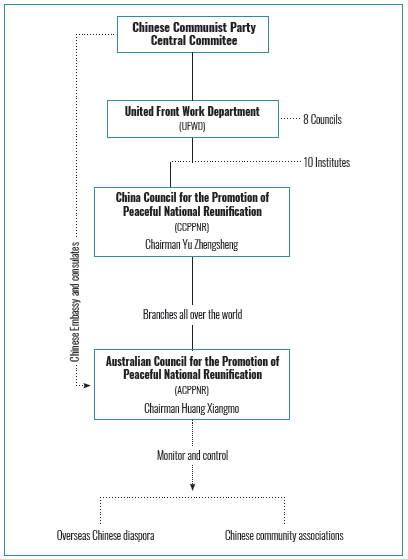 CCPPNR has branches around the world. In Australia, apart from the Australian Council for the Promotion of Peaceful Reunification of China (ACPPRC), there are also branches in New South Wales, Queensland, Victoria, Northern Territory, South Australia and Western Australia.

The current head of ACPPRC is Huang Xiangmo, a Chinese citizen. A few Australian politicians serve as honorary advisors for this council.

The ACPPRC and the state and territory branches of the CCPPNR are all under the Chinese Consulate’s supervision and command. The CCPPNR serves as a prominent leader of all Chinese community associations, which enables the Chinese Consulate to establish comprehensive control, through the CCPPNR, over these communities. In recent years, any large-scale protest or welcome activity has been organised and facilitated by the CCPPNR.

In the current administrative structure of the Chinese Communist Party (CCP), the CCPPNR is part of the United Front Work Department. According to the CCP’s public website, the UFWD is an institution under the direct control of the Central Committee and is headed by a government minister. The UFWD operates under the directives of the Party without implicating the Party’s name. Outside of mainland China, apart from being responsible for Taiwan-related work, the UFWD is responsible for managing overseas student associations, Chinese communities and other related works.

Today’s UFWD, through the CCPPNR, focuses on supporting and transmitting the influence of the CCP overseas, controlling Chinese communities and monitoring the words and actions of overseas Chinese.

Zheng Zhang is a political commentator on China.

The Reality of Left-Behind Children in China

New Information Revealed About The Disappearance of Flight MH370

Uplift Your Day With Colorful Tulips