Lt. Cmdr. Edward C. Lin, who served on some of the Navy’s most sensitive intelligence gathering aircraft, has now been accused by the service of passing secrets to China.

The U.S. Naval officer, who has been charged with espionage, was a Taiwanese-born flight officer assigned to a Naval reconnaissance unit. He was arrested eight months ago; however, his case only became public at his pre-trial hearing, which will determine whether he will face a court martial.

In the highly secretive case, Lin is accused of providing classified information to China, according to U.S. officials, and is facing several counts of espionage and other charges outlined during an Article 32 hearing in Norfolk, Va.

The service had not released his identity; however, a U.S. official did disclose it under the condition of anonymity, citing the sensitivity of the case. USNI News was the first to report Lin’s connection with the case.

Lin, originally a Taiwanese national before his family moved to the U.S., is currently assigned to Commander Patrol and Reconnaissance Group that oversees maritime patrol aircraft such as the P-8A Poseidon and P-3C Orion spy planes and the MQ-4C Triton surveillance drone.

A U.S. official has told ABC News that Lin was arrested at an airport in the U.S. Pacific Command region while bound for a foreign country. He is currently being held at the Naval Consolidated Brig in Chesapeake, Virginia. 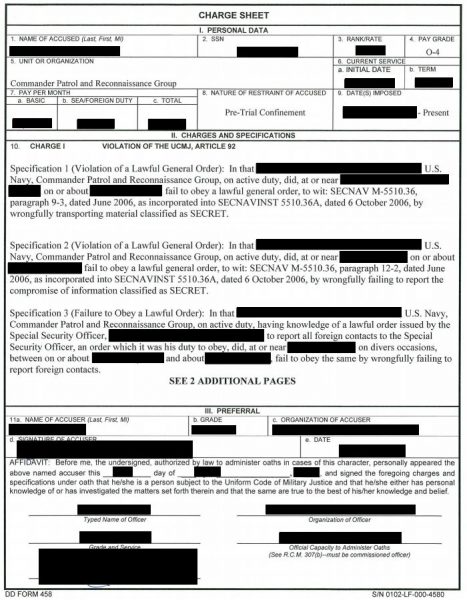 The charge sheets that were presented at the Article 32 hearing were heavily redacted. However, they did state that the officer gave secret information “relating to the national defense to representatives of a foreign government.” Few other details are known about the case as much of the evidence is classified. 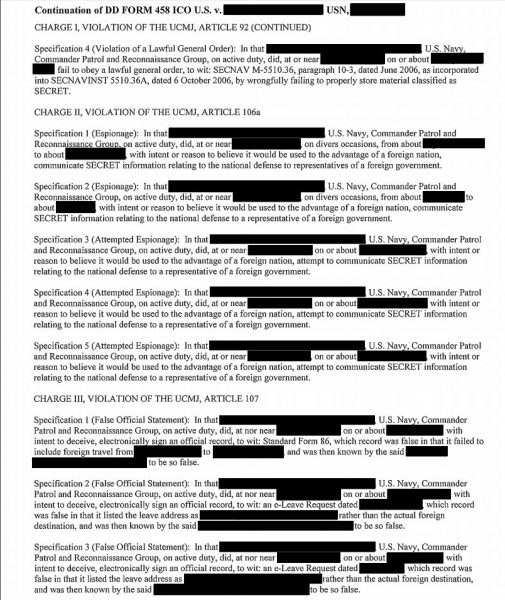 What is known is the officer has been charged with five counts of espionage and attempted espionage. The documents accuse that on “divers occasions” the officer did “with intent or reason to believe it would be used to the advantage of a foreign nation, attempt to communicate SECRET information relating to the national defense to a representative of a foreign government.” 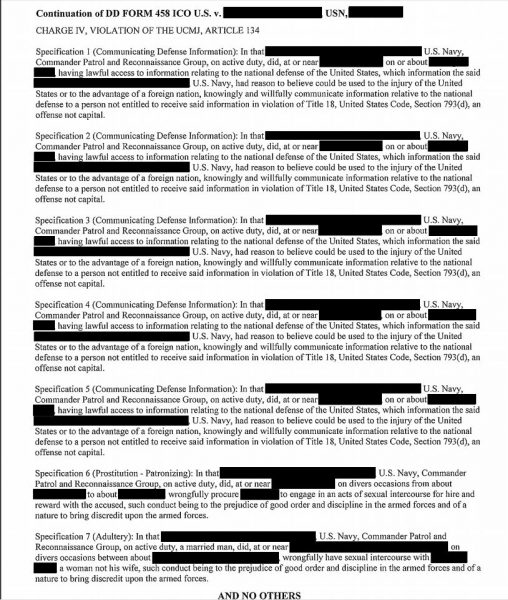 He has also been charged with four counts of violating a Lawful General Order by “wrongfully transporting material classified as SECRET.” There are also seven counts of communicating defense information “to a person not entitled to receive said information,” hiring a prostitute for sex, committing adultery, and not disclosing foreign travel to the U.S. government as required, and lying about it after the fact.

Lin had moved to the U.S. when he was 14. He was then naturalized in 2008 among nine other military members. According to a Navy release that covered the ceremony, Lin thanked his fellow service members for protecting America, saying:

“You have recognized that not only do citizens have rights, but citizens also have responsibilities. The responsibility you are performing even now as non-U.S. citizen.

“Extraordinary events made this nation and our military. People like you, men and women who stepped forward when their nation needed them accomplished these extraordinary events. I thank you for your decision to serve.”

The case remains under investigation by the Naval Criminal Investigative Service and the FBI, and spokesmen for senior Navy officials, including Navy Secretary Ray Mabus and Adm. John Richardson, chief of naval operations

Troy Oakes
Troy was born and raised in Australia and has always wanted to know why and how things work, which led him to his love for science. He is a professional photographer and enjoys taking pictures of Australia's beautiful landscapes. He is also a professional storm chaser where he currently lives in Hervey Bay, Australia.

The Holocaust is one of the biggest genocides of the 20th century that has left a huge impact...
Read more

Researchers at the Paul Scherrer Institute PSI, together with colleagues from several other European institutions, have investigated whether particulate matter from certain...
Read more
Load more