U.S. Officials Launching Their Own Investigation Into the ‘Death Of Cecil’

Cecil the lion and his killer, Dr. Walter Palmer. (Screenshot/Facebook)

The death of Cecil the lion has caused enormous outrage around the world.

Now, U.S. officials are launching their own investigation into the killing of Cecil.

But Dr. Walter Palmer has been in hiding, with officials saying that they have been unable to reach him.

The U.S. Fish and Wildlife Service (FWS) said that it was “deeply concerned” about the “tragic” death of Cecil. He is already the most hated man in America for killing the lion, and now it seems Palmer is fast becoming one of the most wanted.

The Minnesota dentist has not been seen since he was identified as the killer of Africa’s most famous lion, and now the U.S. Fish and Wildlife Service has opened its own investigation. For those who don’t know about the story, here is a recap. Earlier this month, trophy hunter dentist Walter Palmer killed Cecil the lion after the big cat was allegedly lured out of the Hwange National Park boundaries.

The U.S. Fish and Wildlife Service (FWS) was quick to respond, with the agency saying on Twitter: “We’re investigating the killing of #CecilTheLion. Will go where facts lead. We ask Dr. Palmer or his rep to contact USFWS immediately.” 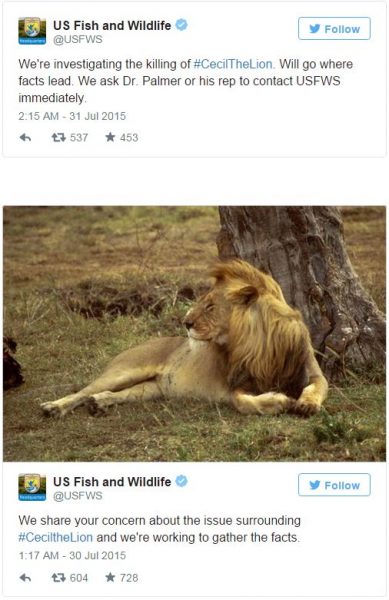 According to the BBC, FWS said: “We are currently gathering facts about the issue and will assist Zimbabwe officials in whatever manner requested. At this point in time, however, multiple efforts to contact Dr. Walter Palmer have been unsuccessful.”

It also said in a statement: “It is up to all of us—not just the people of Africa—to ensure that healthy, wild populations of animals continue to roam the Savannah for generations to come.”

A petition, which urges Secretary of State John Kerry and Attorney General Loretta Lynch to extradite Dr Palmer to Zimbabwe to face justice for illegally killing the country’s “national icon”, has attracted more than 154,378 signatures, and that was in its first day. A White House policy states that if any petition exceeds 100,000 signatures within 30 days, it requires a response from the government. 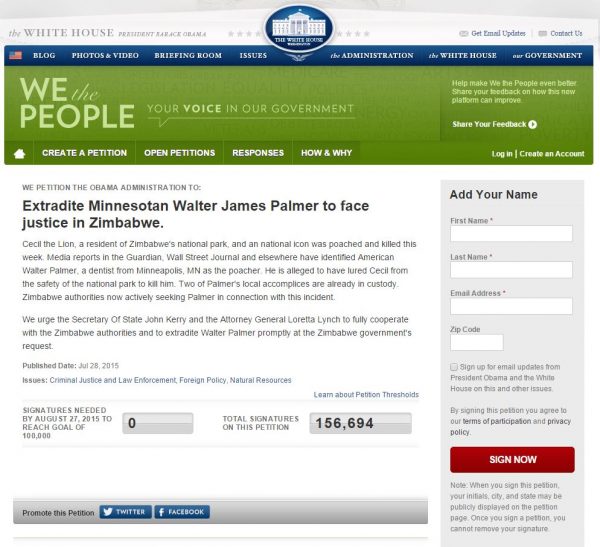 At Palmar’s River Bluff Dental practice in Minnesota, the public are letting him know what they think, with one sign saying “Rot in Hell,” while other people were leaving plush toys of lions, tigers, and monkeys.

Congresswoman Betty McCollum has said: “To bait and kill a threatened animal, like this African lion, for sport cannot be called hunting, but rather a disgraceful display of callous cruelty.”

She has urged the U.S. Attorney’s Office and the USFWS to “investigate whether U.S. laws were violated related to conspiracy, bribery of foreign officials, and the illegal hunting of a protected species or animal.”

This is not the first time Palmer has been on the wrong side of the law. According to U.S. court records, Palmer pleaded guilty in 2008 to making false statements to the U.S. Fish and Wildlife Service about a black bear he fatally shot in western Wisconsin. Palmer had a permit to hunt, but shot the animal outside the authorized zone in 2006, and then tried to pass it off as being killed elsewhere, according to court documents. He was given one year probation and fined nearly $3000, News.com reported.

Safari Club International, which is an international hunting organization to which Palmer is a member of, has said that it also was supporting a probe, and that it had revoked his membership.

Palmer said: “I had no idea that the lion I took was a known, local favorite, was collared and part of a study until the end of the hunt. I relied on the expertise of my local professional guides to ensure a legal hunt,” News.com added.

Troy was born and raised in Australia and has always wanted to know why and how things work, which led him to his love for science. He is a professional photographer and enjoys taking pictures of Australia's beautiful landscapes. He is also a professional storm chaser where he currently lives in Hervey Bay, Australia.

4-Meter Reptile Found in the Belly of Prehistoric Marine Carnivore

6 Things to Know About Red Pandas

The Troubles of a Name: North Chinese Leopard

Do Aliens Exist? Watch What the Director of SETI Thinks

Is Using a Placebo That Bad?