Is SeaWorld Guilty of Corporate Espionage?

'SeaWorld knows that the public is rejecting its cruel orca prisons, and is so desperate that it created a corporate espionage campaign.” (Image: Pixabay/CC0 Public Domain)

People for the Ethical Treatment of Animals (PETA) have accused SeaWorld of corporate espionage when it discovered a SeaWorld employee had infiltrated their ranks.

PETA said in a press release: Thomas Jones has been trying to cozy up to PETA employees and unsuspecting members of the public who object to SeaWorld’s practices, attending animal rights meetings and peaceful protests at SeaWorld, and going so far as to post inflammatory messages on social media, such as “burn [SeaWorld] to the ground” and “drain the new tanks at #SeaWorld” in an attempt to incite illegal actions. But PETA has exposed “Thomas Jones” as Paul T. McComb, a human resources employee at SeaWorld San Diego.

PETA has released pictures of Jones and McComb who is a SeaWorld human resources worker, which seems to show the same person. Jones was even arrested alongside other activists in 2014 while protesting against SeaWorld, and has been doing so for several years.

“SeaWorld knows that the public is rejecting its cruel orca prisons, and is so desperate that it created a corporate espionage campaign,” says PETA Senior Vice President Lisa Lange. “Instead of creating a dirty tricks department, SeaWorld should put its resources into releasing the orcas into coastal sanctuaries.”

According to Bloomberg, the claim, if true, could mark another public-relations black eye for SeaWorld, which has faced withering criticism of its marquee attraction—trained killer whales performing for guests.

SeaWorld has endured a critical documentary, boycotts, and the loss of sponsorships.

Attendance and revenue have suffered.

Fred Jacobs, a SeaWorld spokesman, said in a statement: “We are focused on the safety of our team members, guests and animals, and beyond that we do not comment on our security operations. This is a responsibility that we take very seriously, especially as animal rights groups have become increasingly extreme in their rhetoric and tactics.”

Jacobs declined to answer any questions from The Guardian, but pointed out: “Peta itself actively recruits animal rights activists to gain employment at companies like SeaWorld, as this job posting demonstrates. Safety is our top priority, and we will not waiver from that commitment.”

A press release from PETA stated: “Jones” signed up for PETA’s Action Team on its website, and his information listed two different addresses. The first address, in Jamul, California, doesn’t exist. The second, a post office box in San Diego, was registered to Ric Marcelino, director of security at SeaWorld San Diego. “Jones” solicited information about peaceful protests against SeaWorld from PETA staffers and even participated in and was arrested during a protest of SeaWorld’s float in the 2014 Rose Parade. 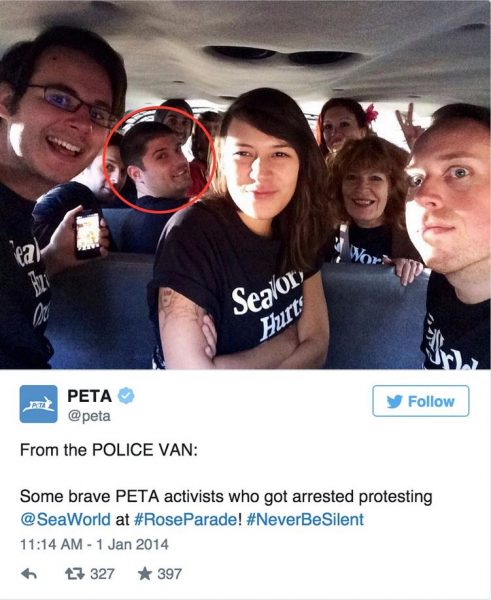 According to The Guardian, Lange said she became suspicious of Jones when she was arrested alongside him at the 2014 Rose Parade in Pasadena, California, but he was released without charge, and his name did not appear on arrest sheets.

“I was one of the protesters at the Rose Parade, and I was arrested with him, but when we were let out of jail, he was gone,” she told The Guardian. “We were waiting to make sure we got everybody out, and kept asking: ‘Where is he? Where is he?’ He finally texted to say he was already at home. He said he forgot his ID, so the police just let him out. Now, that would never happen.”

One year after Blackfish, SeaWorld goes on the offensive:

A Pasadena police spokesman told Bloomberg that there were no records of a Thomas Jones or Paul McComb being arrested that day, despite a photo showing Jones being handcuffed.

That was when other activists started to search through Jones’s Facebook and Twitter feeds. It was then they found the posts where he had tried to incite other activists to carry out “illegal violent things,” which goes against Peta’s principles. “It just smelled bad,” Lange said.

You make up your own mind who is at fault—leave a comment.

Troy was born and raised in Australia and has always wanted to know why and how things work, which led him to his love for science. He is a professional photographer and enjoys taking pictures of Australia's beautiful landscapes. He is also a professional storm chaser where he currently lives in Hervey Bay, Australia.

Magpies and Kookaburras Cheer Us Up While Under Lockdown

Get Whiter Teeth Naturally, From Your Food

The Tragedy of Sandra Bland and Her Wrongful Arrest